Kim and Sam’s New Forest hotel wedding at Rhinefield House Hotel in Hampshire promised to be a wonderful day. Having met most recently in a secluded nook of a country inn we were in on the planning. We had talked in hushed tones about their exciting plans for their big day. These included a subtle beer theme, a wedding magician and a surprise singing waiter. Two rugby fans planned all this for the day of England’s victory over the All Blacks in the rugby world cup.

We found the bridal party at the Spot in the Woods boutique Bed & Breakfast in the heart of the New Forest. Arriving at the stroke of half time in the World Cup rugby match between England and the All Blacks. Kim was in a state of stoic calm, as the girls whizzed about the place collecting and delivering. In truth, they were much more interested in the sporting goings-on than the wedding prep! They enjoyed Berocca and other bubbly type drinks during hair and make-up styling. The gorgeous white flower bouquets arrive from With Love Florists, – a visual and olfactory treat. Kim’s parents were on hand to lend moral support and check on the rugby score. Outside the grey clouds had amassed, darkened the skies. The day-long downpour began. 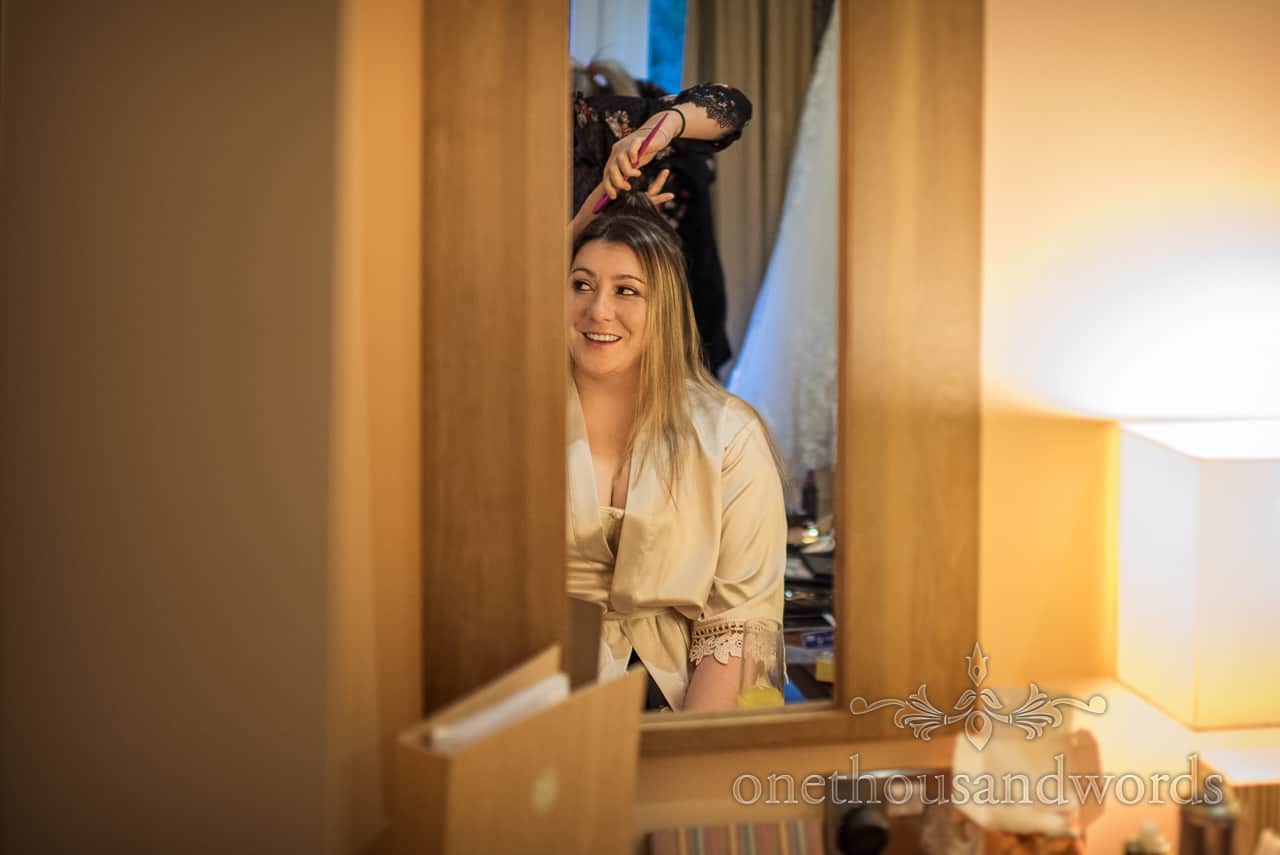 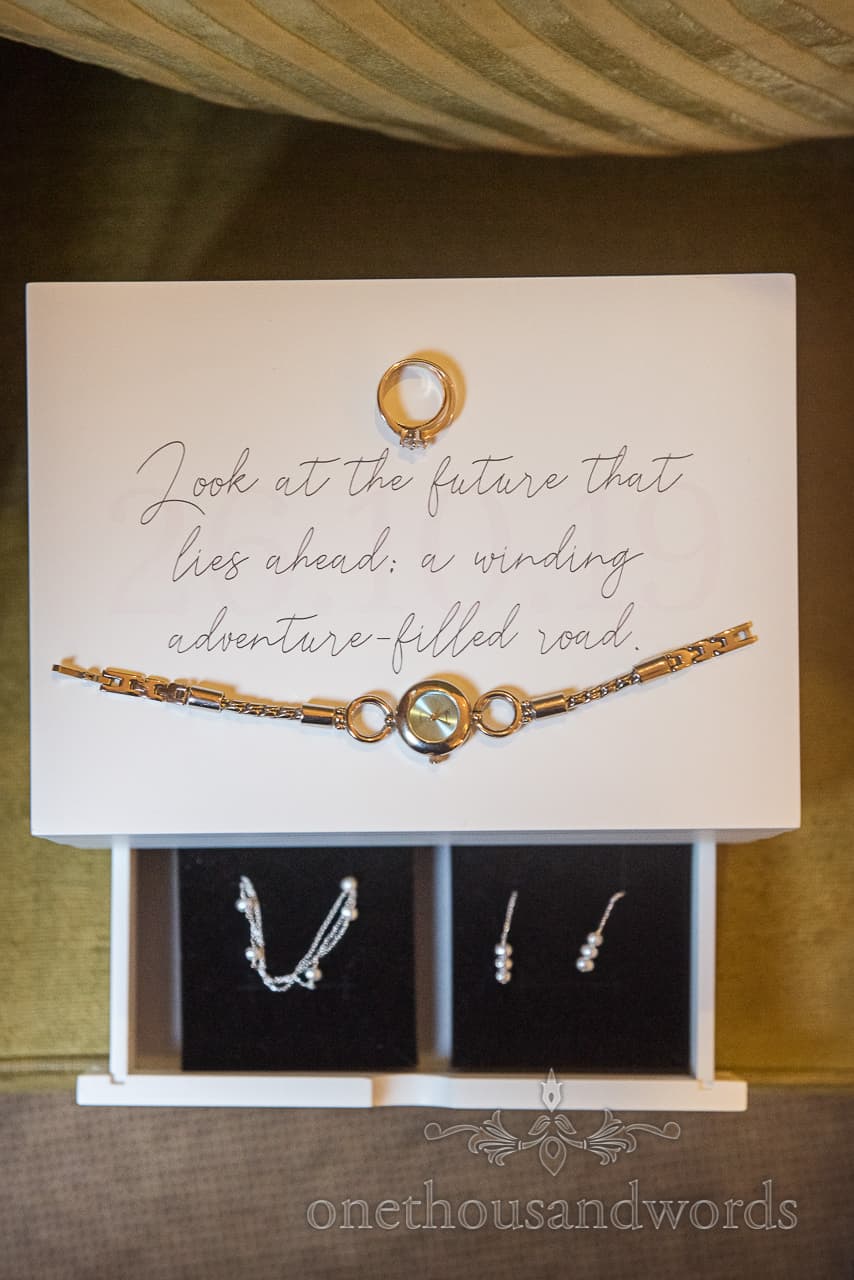 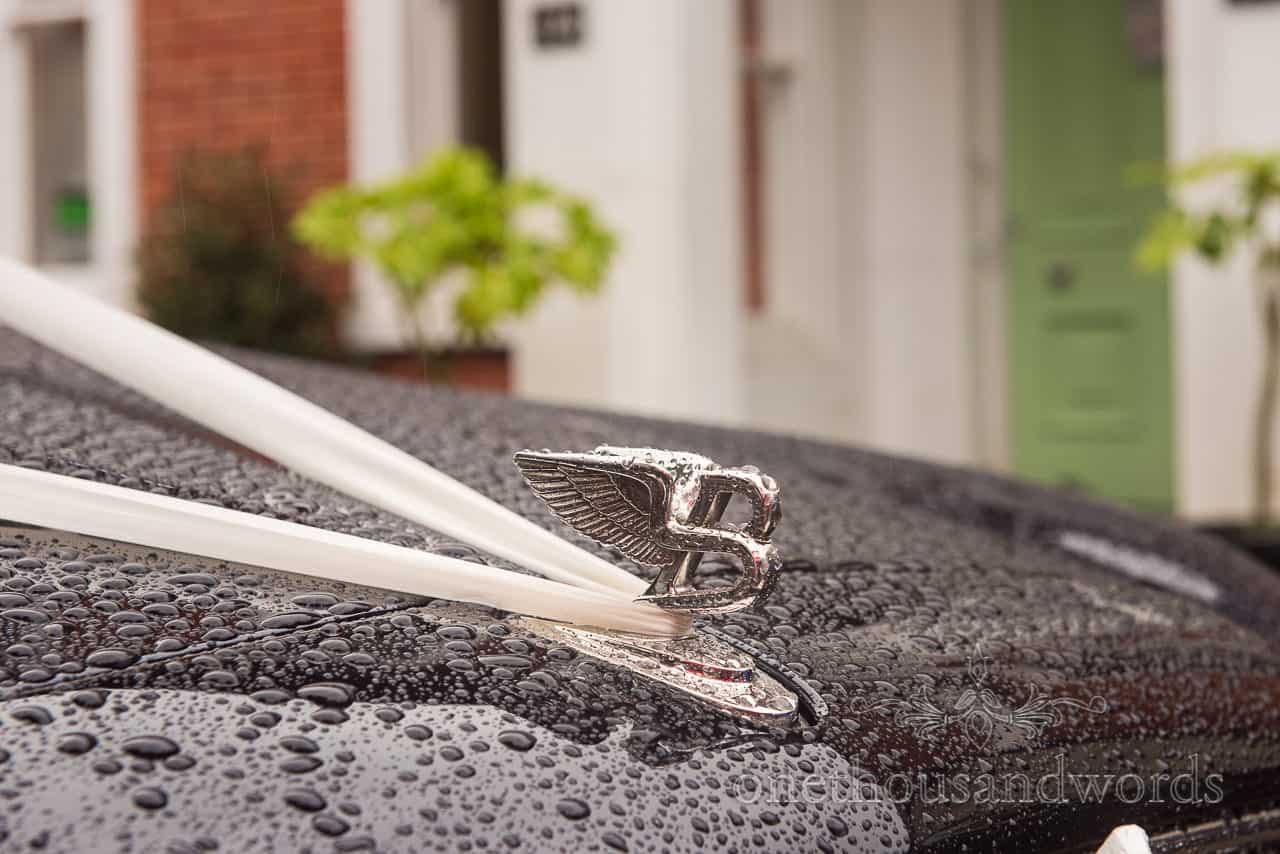 As the heavy rain hammered down outside wedding guests gathered in the bar at Rhinefield House. Autumn was in the air at this New Forest hotel wedding venue. The huge trees outside were turning browns, reds and oranges. The interior decorations included pumpkins and fruits of the season. In the bar, there was much talk of England’s rugby victory.

The great hall had was now ready Sam and his best man met with the registrars. Once the buttonholes had been put in place it was time to invite guests to gather in the great hall to await the arrival of the bride. The bridesmaids arrived first and waited patiently. Kim then arrived in a black Bentley from RK Prestige Motors with her father. 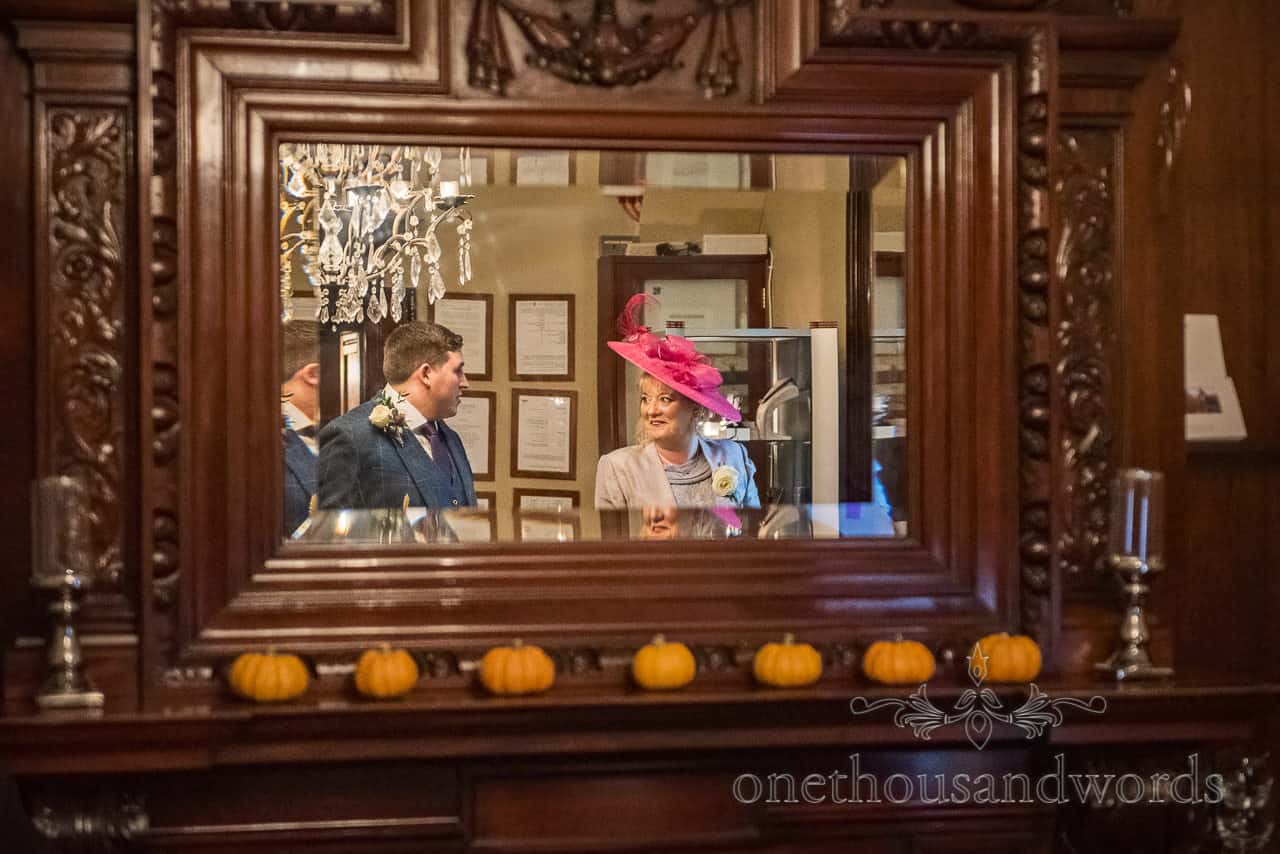 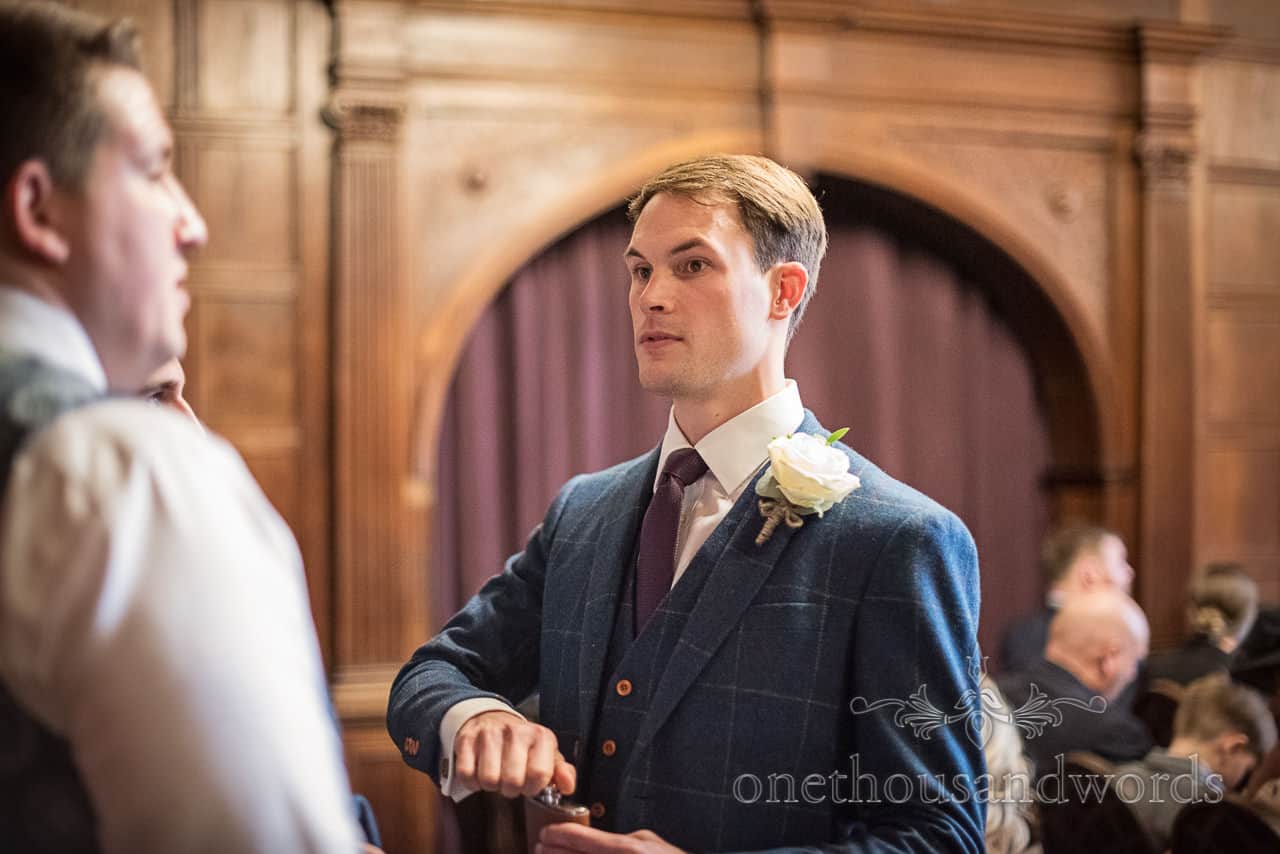 We love creating wedding photographs at Rhinefield House. The grandeur and detail make it an evocative New Forest hotel wedding venue. The grand hall is an amazing location for a wedding ceremony. Sam, now looking a little more nervous (and warm in his three-piece tweed suit) stood front and centre. His best man was by his side below the large grand hall window watched by friends and family.

Following her bridesmaids, Kim came down the aisle. She arrived alongside her husband to be. With a lump in his throat, her father gave away her hand to Sam and took his seat. After two heartfelt readings, the happy couple made their promises to each other. With the exchange of the rings complete, they were pronounced husband and wife. They had their first kiss to rapturous applause. Kim and Sam walked down the aisle as husband and wife to a standing ovation (even louder than that the girls gave the England team earlier)!

Next, a drinks reception took place in the dimly lit bar as the rain lashed against the windows. Gifts gathered on a table next to the beer-themed table plan by Zoe Barker Design and messages placed into a beer barrel guest book. Tasty canapes circulated the room, while wedding magician Dominic Reyes was on hand to entertain. After some indoor group photos, we set off around the hotel to capture images of the newlyweds. 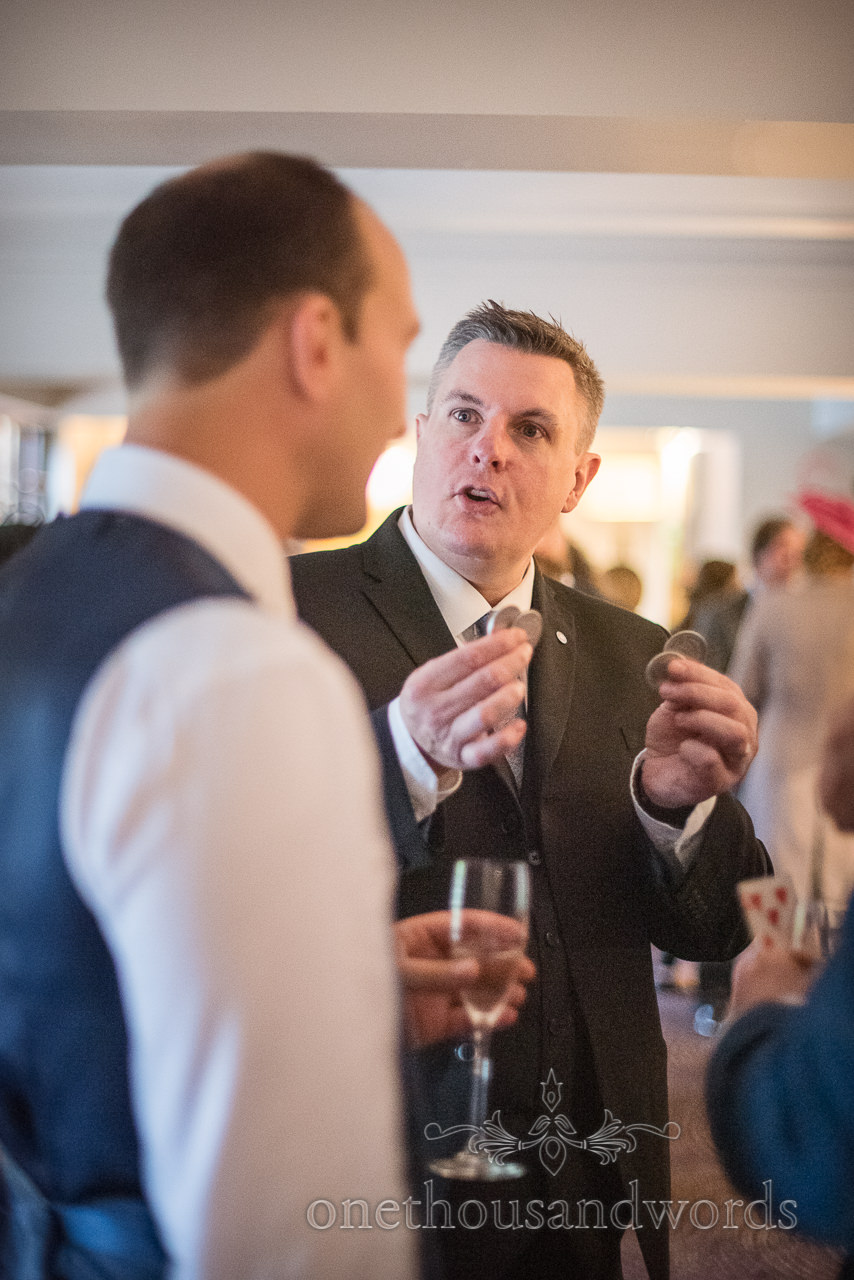 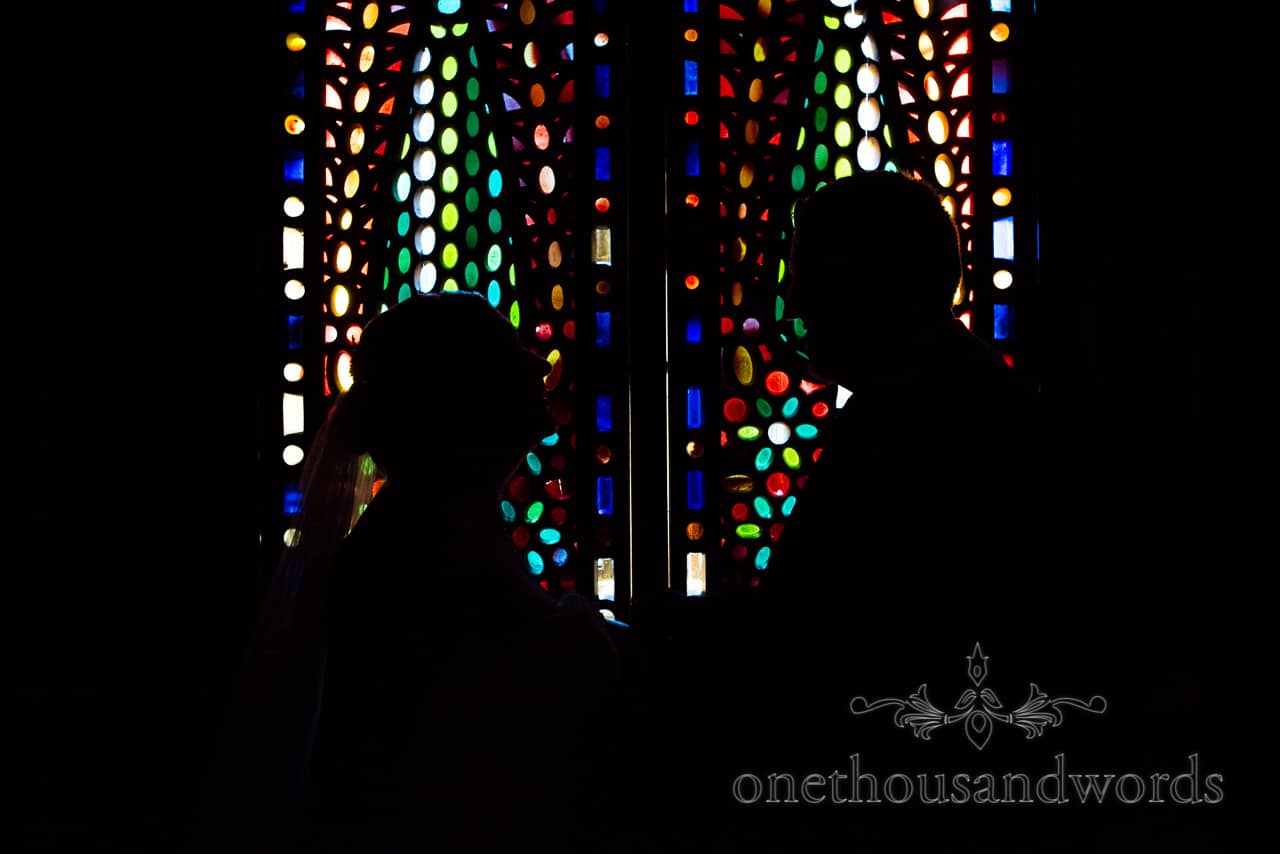 Once the Great hall had been arranged with the beer-themed table names the wedding party gathered at the entrance. They received guests and guided them to their seats. Afterwards, the newlyweds were welcomed in with rapturous applause. This New Forest hotel wedding was next treated to a delicious 8-course meal with a surprise during the service for everyone. 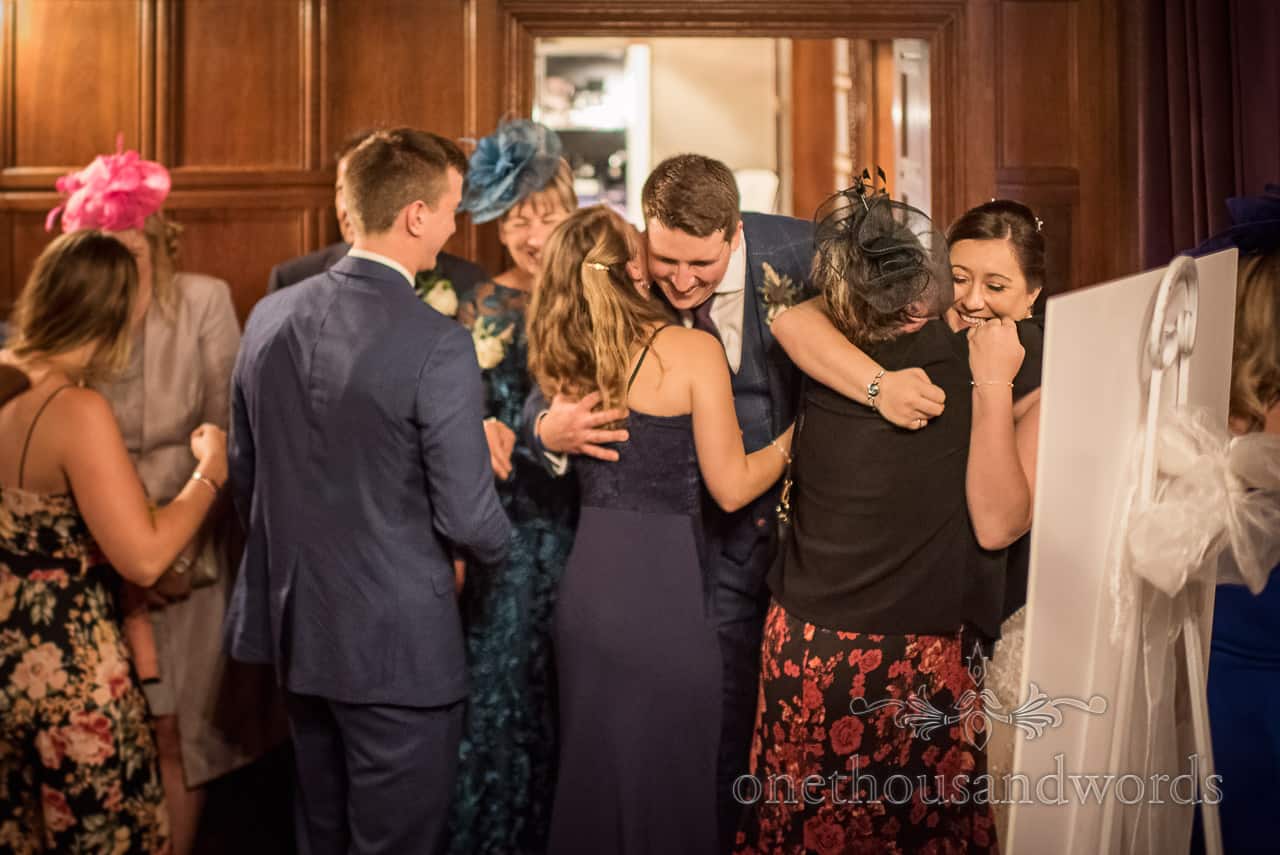 Tom, a member of the waiting staff surprised everyone with a reveal that he was, in fact, Lewis Hutton, singing waiter. We enjoyed some sing-along classics and questionable dancing. The climax was a conga procession winding its way around the many rooms of this New Forest hotel wedding venue. After the finale of his performance, everyone returned to their seats. Kim’s father kicked off the speeches with tales of his daughter growing up and her poor grasp of geography. He finished with a gift of a framed map. Next up was Kim’s maid of honour followed by Sam himself. The speeches and laughter were brought to a close by Sam’s best man Tom. 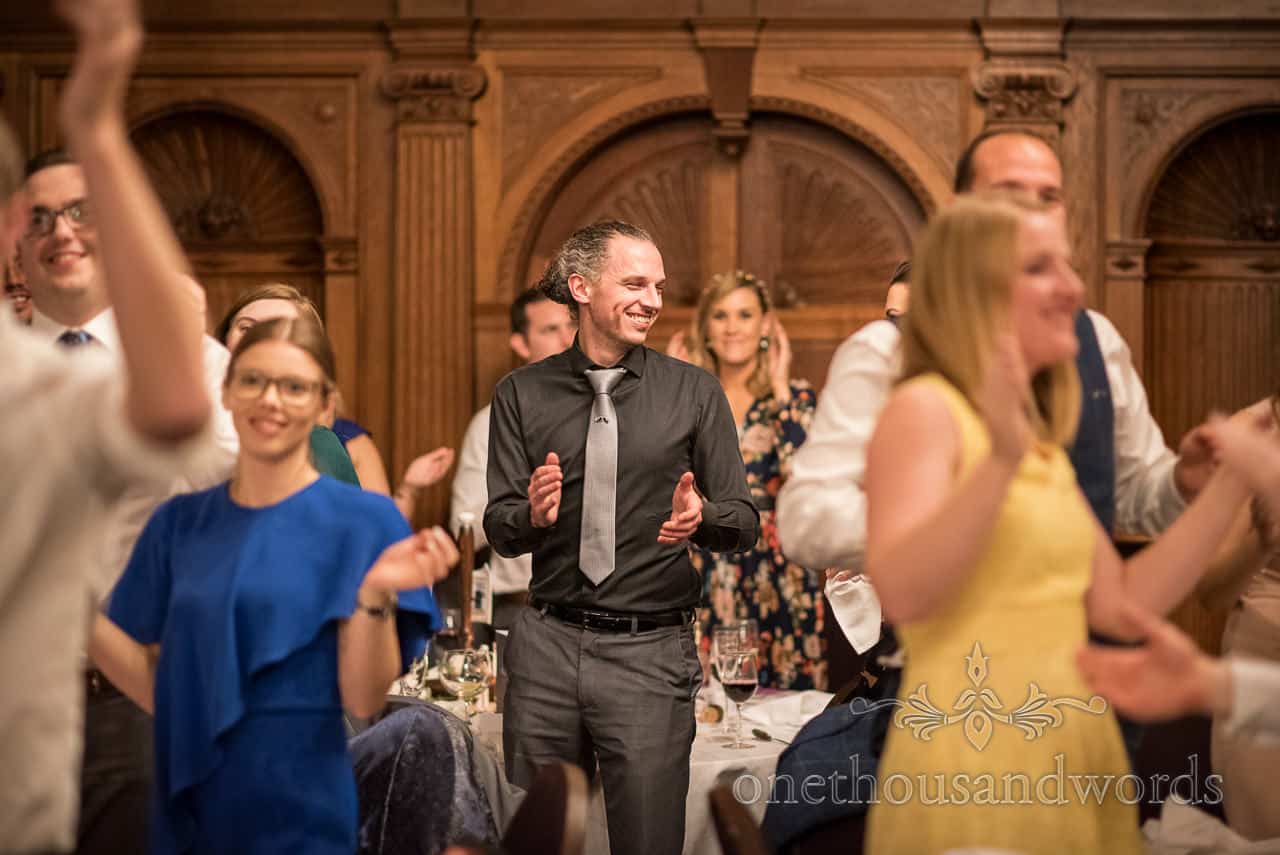 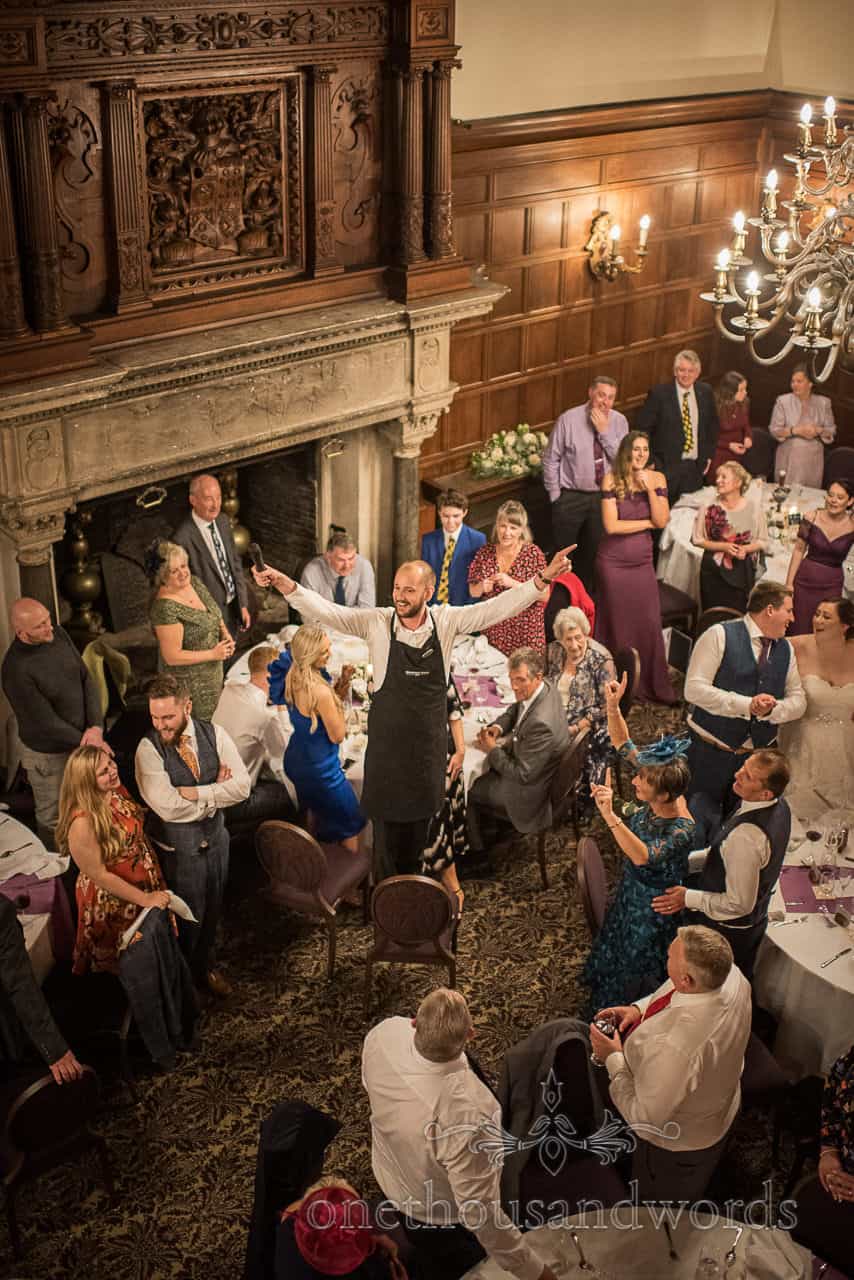 The newlyweds then cut the gorgeous wedding cake from Couture Cake Designs before the smell of brewed coffee filled the air. A light curtain backdrop was set up in the snug with fancy dress and props for guests to use as a photo booth. Next, Lewis Hutton continued his performance in the bar area. Classic tunes and sing along anthems got everyone going. The busy dance floor parted for the father-daughter dance. It was then the turn of the newlyweds with their first dance and shortly all to joined under the disco lights.

Meanwhile, in the great hall, indoor croquet had been set up and once they remembered the rules guests competed as seriously as they could! Back in the bar Lewis/ waiter/ singer had now turned into a DJ. Many a shape was thrown – the macarena came on and we took that as our queue to leave the New Forest hotel wedding crowds dancing the night away.